The Rills are a mixture of a Northern Oasis inspired and a trendy post-punk band from London. With this, they managed to inspire not only with their music, but also via Tiktok. 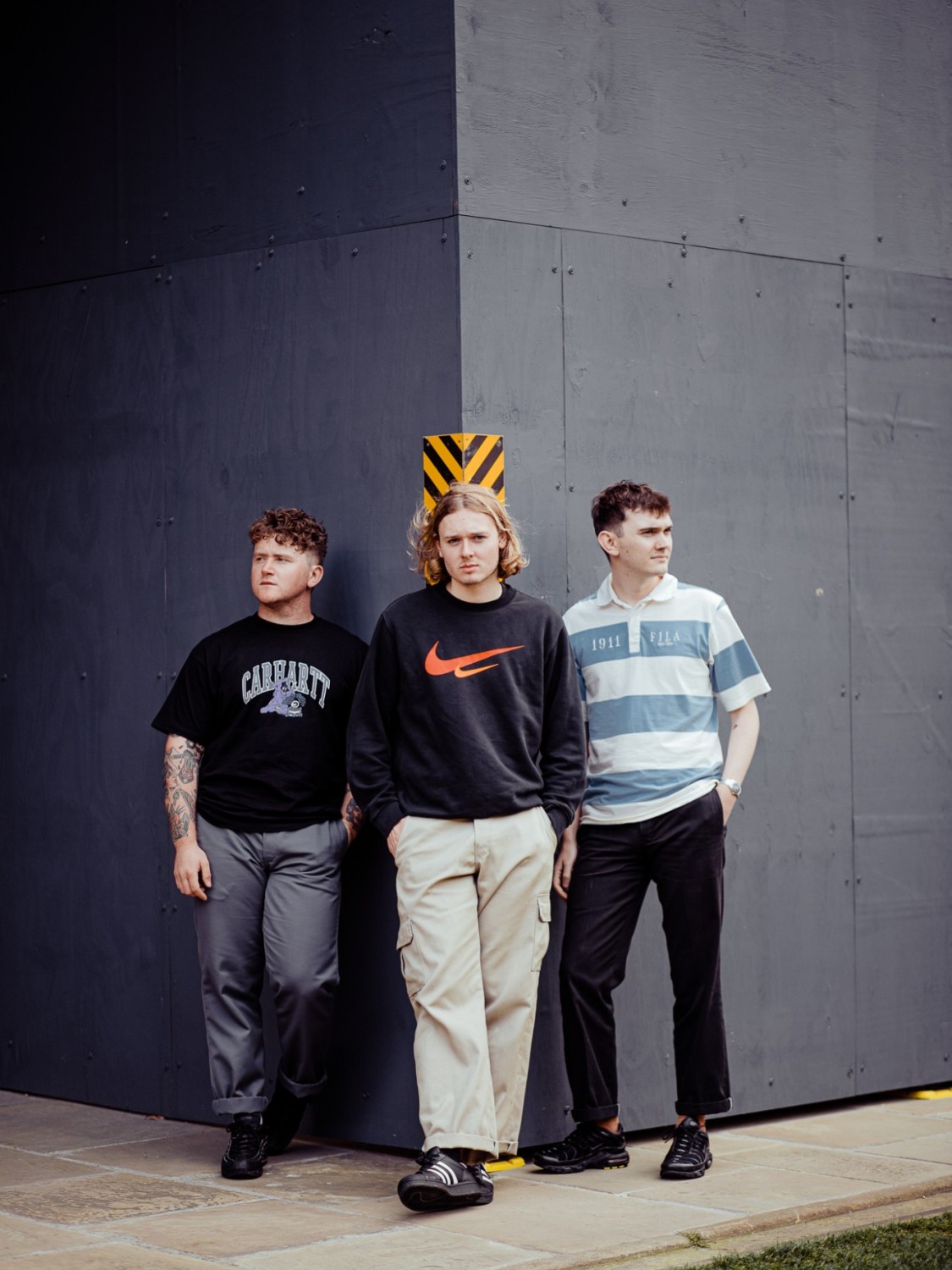 Armed with a forthcoming debut EP full of biting, streamlined indie - all taught, propulsive rhythms and witty, acerbic vocals - the omnipresent backbone of small town living lies front and centre in everything that Lincoln trio The Rills create, from their tales of ‘Stardog’s and ‘Skint Eastwood’s to the driving ambition to make something bigger of themselves that rings in every cutthroat riff.

If you can take the band out of Lincoln, then you can’t take the keen eye for wayward characters and hometown anti-heroes out of the band, and nor should you want to. Having spent the past 18 limbo months cultivating a fervent online following (their joke-filled TikTok currently stands at a not-too-shabby 4 million likes), now The Rills - vocalist/ guitarist Mitchell Spencer, bassist Callum Warner-Webb and drummer Mason Cassar - are ready to pick up that mantle and run with it. “Growing up in a small town has had such a huge influence on the way I approach songwriting,” Mitch begins, “and, coming from there, we always felt like the underdogs. No-one ever does anything from Lincoln, so we had to be the ones to make it happen.”

The first seeds of The Rills began more than a decade ago in a nondescript East Midlands skatepark where Mitch and Callum first became tentative friends. It would take another few years until they’d broach the subject of starting a band, and a move first to Sheffield and then to the big smoke until they’d finally meet Mason and hone themselves into the trio they are today. But, bonded by a clutch of mutual early musical loves - Arctic Monkeys and The Libertines chief among them - the pair’s ambition was strong from the off.

“Trying to do music or anything out of the ordinary is extremely difficult in a place like Lincoln because there’s no infrastructure or industry there,” Mitch explains. “There were never any gigs, and the ones that were there were massive, so you go from pub gigs with cover bands to seeing the Kaiser Chiefs. There were no young bands, so we knew if we were gonna build anything, we had to leave.”

They describe finding their drummer as like “manifesting the exact right person into being”. Having booked their first London show, and with only a week left until the date, Mason arrived out of nowhere. “I was in one of my first uni lectures and Mason just walked up and said, ‘You guys need a drummer. I’m your drummer’,” Callum recalls with a laugh. “He was this Fred Perry-wearing guy who had a Vespa, which was exactly what we wanted to be at the time. We had one practice together, did the show and he just smashed it.”

A couple of early singles - 2017’s ‘Pyro’ and the following year’s ‘Us & Them’ - stand as testament to those first days of the band (then operating with an additional second guitarist), but it was when they streamlined down to a trio at the start of 2020 that The Rills really began to click into gear. Acting as a total sonic reset, they describe the difference as “suddenly going from this blasting wall of sound to there being three instruments, with clear dynamics, where it felt concise”. “The whole ethos of the band had changed,” Mitch explains. “The mission statement was ’less is more’, in absolutely every aspect.”

Influenced by the broad-ranging but energy-packed punk and alternative bands of the South London scene they’d been submerging themselves in, The Rills 2.0 set to rid their music of any excess fat, channelling the visceral quiet-loud dynamics of long term loves Pixies, and incorporating muscular drums and pointed rhythms into a palette that leaves nowhere to hide. Lyrically, meanwhile, Mitch’s knack for narrating the rogue chancers that populated his youth would come even further to the fore, with last year’s ‘Stardog’ and ‘The Angler’ portraying their titular characters with a razor sharp pen.

“Pretty much everything I’ve written has something to do with people who think they’re so much bigger than they are because they come from a small town,” he explains, as Callum picks up: “We always try to see it from their point of view; it’s not their fault, it’s their environment. We’re not saying ‘Stardog’ is an absolute loser drug dealer, he’s not a villain, it’s just where he’s from and how he’s ended up.”

Almost immediately plunged into lockdown, the trio used their time apart wisely, winning people over with TikTok and Twitch videos that would keep eyes on the band even while they were away. But now, having spent the spring of 2021 writing and then recording their debut EP at Worcestershire’s residential Vale Studios alongside producer Jonathan Hucks, The Rills are ready to reintroduce their tribe of new followers to what they’re really here for.

Forthcoming first single ‘Skint Eastwood’ - a propulsive canter of drums offset by flourishes of pay-off melody - should do the trick. “If you grew up in Lincoln, you’d see lads going about on their BMXs with a can of Red Bull and a fag, and that’s their whole lives: these guys that are fundamentally quite sad and alone but have this hard outer shell, with all this local bravado,” Mitch explains. “It’s like a manifesto for the rest of the EP,” Callum nods. “It captures all the aspects of the whole record - it has a big chorus, but it’s a bit weird, and it’s fast and powerful but it also has a moment of real introspection. It covers all the bases.”

Set for release via tastemaker label Nice Swan (home to early releases from Sports Team, FUR, Feet and more), it’s the cumulation of years of graft, but having lost none of the spark that ignited them in the first place.

“The pressure’s on now, but we work well under pressure and I think we’ve harnessed that with the new tunes and the amount of effort we’ve put into them,” Mitch nods. “For me, [seeing people respond to it] has been the biggest confidence boost I’ve ever had. Fucking hell, I’ve been right this whole time to keep going!”